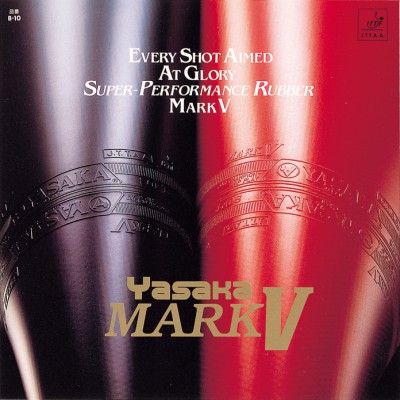 MARK V  is the best selling rubber in the Mark V Line and probably the most well-known product in table tennis. The rubber has helped players to win tournaments all over the World.

MARK V represents not only the very best playing characteristics but also an unsurpassed consistency of product. The secrets behind the perfectly balanced playing  characteristics are the mixture between synthetic rubber and natural rubber, the geometry (shape)  of the pimples and the very high standards demanded during the production process in the factory in Tokyo. In addition, the very special Mark V sponge has extremely small tolerances for the differences in hardness and dynamic.

A large number of players from all continents have, with the use of MARK V, developed their playing technique and appreciate the consistent playing characteristics during the rubber’s long playing life.

The history of Mark V

In the mid 70’s  Winning the men´s single in the 1970 European Championships and 1971 World Championships MARK V started a victory road in table tennis all over the world. Since then MARK V has been continously developed and Yasaka MARK V is probably the most well known table tennis product on the market.

Nowadays – Yasaka Mark V is still one of the most popular rubbers in the world – much thanks to its good playing characteristics and the  rubber’s long durability.

See the complete range of products in the Mark V Line: